When I realised I couldn't find my way home, I made a new one where I stood.

Acceso Lantus is a Forbidden mage who is friendly, if uncoordinated. Untransformed, she is blind, but opts not to tell people this directly, instead preferring that they discover this themselves.

Acceso is short and of average build. She has waist-length reddish-brown hair that is generally worn tied up in twin buns, secured with purple ribbons. She tends to wear sweater sets in various shades of green, these would probably be shirt length on someone of average height, but on her they sit at a length comparable to a very short dress.

She is never seen without her mage item, a perfume bottle pendant which she wears around her neck.

Up until recently, she wore a strip of organza ribbon around her eyes to disguise their obviously blind nature, but has since disgarded this ribbon as she feels it attracts negative attention, and taken up tinted glasses instead.

Acceso has two mage form outfits , both with the same Forbidden traits of wings on both her head and lower back. The wing attached near her right hip is significantly smaller than that of the left because of a torn lower back ligament. Additionally, in both mage forms her hair is untied.

The mage form she is most frequently seen in consists of light gold armour, a green bodysuit/skirt and green train. The armour  is asymmetrical, with a shoulder guard on the right shoulder, but not on the left. The protective armour makes this form somewhat more practical, but also somewhat more difficult to maneuvre in.

The other form has a lighter weight outfit, with an asymmetrical dress that has attached feathers. In this form, Acceso wears an opaque blindfold.

It should be noted that in both forms she is able to see, but her sight is compromised in the second form because of the blindfold.

Cheerful, polite, and easy-going, Acceso generally tries to avoid conflict. Due to her fear of being judged by others because of her blindness, she spends much of her free time alone. She's uncompetitive and has an inferiority complex, believing herself to be very weak and a burden to her friends, but also resigned to the idea that change would be difficult. Despite thinking that she is unskilled in many daily tasks, she is rather proud and tends to insist on doing everything herself.

Acceso frequently displays an older sisterly or motherly nature, offering (often unsolicited) advice and demonstrating over-protective tendencies to those she is close to. Though she is insecure and easily jealous, she tries to keep all negative feelings to herself because she wants to follow the same advice that she gives others. She is very polite, but lacks guile and has difficulty holding back her words if she feels strongly about an issue or a person.

Acceso's morality and position on killing other mages, monsters, and civilians is unknown. She has not actively sought fights with any of her mage comrades and only fought monsters when coming to someone's aid, but appears to have no qualms with killing monsters when necessary. It is unknown how far this emotional apathy to killing stretches.

Not much is known about Acceso's past life, as she does not remember much herself, although she does remember having an affectionate father. 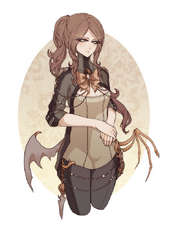 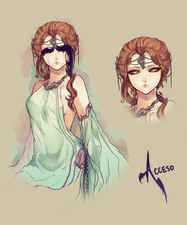 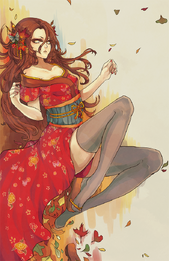 Yukata Event
Add a photo to this gallery

Retrieved from "https://magerp.fandom.com/wiki/Acceso_Lantus?oldid=5304"
Community content is available under CC-BY-SA unless otherwise noted.