Dis'Astrem (δυσἀστήρ), known as The One with Hair that Shine Silver, is the Gadri'Annis NPC. A gender neutral person who sells mysterious ware in exchange for currency and various loot items gained from Annis and Pestis.

However, he now appears in Fyr'st after the end of Gadri'Annis, revealed as a witch, same as Missy.

A detachable collar and bowtie, a red halter top, a waist corset and skull from the concept of plague doctors, Dis has the most interesting of attire. The hair is slightly duo-toned—silver and dark grey—and the eyebrows are rather tiny to frame the red eyes.

Despite having a more modern approach to witches, he is more traditional in terms of how to travel. The broom can be turned into a cane.

In Gadri'Annis, Dis has a more traditional costume, based on the the salem trials during "puritan" period: a red caplet, floppy magician's hat and spurs, strangely.

Commonly takes an appearace of a different form. Master of disguises.

A gentleman of sorts. He doesn't force himself to have a particular speech pattern like Missy, often smirking at the audience.

A mysterious person who refers to no gender as times, Dis is surrounded by mystery. While working as the strange merchant who exchanges monster drops for rare items to bring back to Fyr'st during Gadri'Annis, he appears to know the mages involved in the event and asks Tarot to say hello to Missy for him.

He hasn't been a confirmed appearance since then until the Royal Ball where he resumes his merchant ways. He seems to have been assisting Missy in the Royal Ball, often having narration thoughts with the fellow witch.

Dis made a small appearance in Tessront, accomplied by Miss Fortune to watch a strange dancing ritual at the theater in Levtro.

The name Dis'Astrem only has been introduced canonically when the townspeople are invited to a brew where the two witches separated the boys and girls into groups to create a stew for the unfortunate.

Initially the exchange NPC for Gadri'Annis.

During the Royal Ball, Dis is the traveling merchant that sells rare goods for a short period of time.

Together with Missy, they run the House of Fortune with his own shop on the second floor. He occasionally takes over the first floor, if Missy is ever busy. Like Missy, he can answer your request in exchange for a favor. However, it differs from Missy's typical ones in a sense of subject.

Missy - Missy's senior witch, assuming that Dis is more powerful. They run the House of Fortune together, although the second floor isn't accessible normally. They like to travel or host events together, such as going to Tessront to watch the cardboard dance or hosting the Royal Ball. 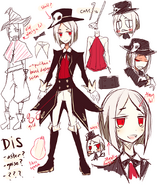 Add a photo to this gallery

Retrieved from "https://magerp.fandom.com/wiki/Dis%27Astrem?oldid=6949"
Community content is available under CC-BY-SA unless otherwise noted.