A First Generation young Mage who is always willing to introduce new Mages and Ordinaries to the world within the town of Fyr'stcercle, mostly known for being a highly empathetic child with lop rabbit ears and a reliable repairman.

Somewhat stereotypically 'nerdy' boy with white and slightly uneven hair, displaying a considerably long tuft only at the right side of his head while the rest remains short at the back. He has round big eyes that require visual aid, so he wears a pair of oval shaped black glasses. His face as well as his shoulders sport a good amount of freckles which are easily seen thanks to his fair skin complexion. A pair of lop rabbit ears drop a bit down his shoulders, toned snow white like his hair but with tan and chocolate little rounded splotches on the tips, similar to the freckles on his skin. His wardrobe usually displays semi-formal attires with a vague hint of Victorian fashion that becomes more prominent depending on the occasion, though it is not rare to see him with less conservative and more cutesy or childish outfits at times.

In his MAGE form he takes the appearance of a tall man with a somewhat muscular or fit build. He wears a monocle to correct his right eye's defectiveness, replacing his usual glasses. A pair of chains go over his shoulder to hold up a steel plate which covers half of his chest and a dark cloak cascades from the plate with an opening in the middle, showing a hollow gear shaped ring from where a second cloak is hanging to cover up most of his lower body. While holding still, both cloaks give him the air of a guardian or even a grim reaper, something enhanced by the fact he wields a scythe styled with pieces that resemble roman numerals as his main weapon. Under the cloaks lie a mostly white outfit, tight at the torso with no sleeves and loose with openings at both sides when reaching the hips. He wears pure white pants and subtle Victorian inspired boots with steel platform soles. A pair of bracelets are worn around his right wrist, one composed of a plain and thin copper ring while the other resembles an inverted gear also made of copper.

Eon is a passive and cheerful boy, loyal to no end and always willing to give hand. He is easily intimidated to the point almost every single person can be seen as a potential threat if their levels of energy overpower Eon's, so if someone kind approaches them but they display a hyperactive demeanor then the boy is likely to cower away from fear. He is easily startled and will squeak upon being surprised, yet none of this holds him back from standing his ground when the call for it comes and he must protect those he holds dear. Based on this his moments of assertiveness are not too rare but if he is capable of coming out of a situation without recurring to violence or aggression he will go for it. In the case it becomes the only way available though, he will still comply even if he is required to taint his hands with blood.

Due to a certain unstable emotional and mental condition there might be rare moments when he loses his grip completely and turns unnecessarily destructive an threatening towards himself or those surrounding him.

Due to a certain mental and emotional condition he may be prone to lose his grip on his collected and passive demeanor, turning sometimes unnecessarily destructive towards himself and in some cases other individuals.

In his Mature form, Eon is extremely taciturn, mostly making use of his vocal cords to warn others about dangers or calling out his own attacks. He loses the ability to express himself properly and instead develops a nearly cold demeanor with barely any emotions aside from his usual poker face, thus it might become difficult to tell what he is truly thinking or feeling. This behavior persists out of battle as well, although he has displayed enough social ability to follow up a conversation, even though he is not one for debating as he remains impartial to most matters from the mundane to the morbid.

Just like many others if not all of them, he arrived to the town without any recollections of his time before his so called trip to Fyr'stcercle. Due to his meek nature however he was not too keen about socializing even with those he was supposed to live with at the assigned house A-3.

His first encounters with other children who happened to be two of his housemates were not exactly the best, with one ending in a stabbing incident and the second with receiving a threat of being forced to stay outside due to blood staining his hand.

Once he was starting to settle down at Fyr'st he was greeted with an impromptu encounter against a Fla'ming Vulture, fighting along Drasil and Aether after the huge bird hoisted him into the air. Sadly, the monster did not go down without consequences, for a nearby Shrine was burned down during the fight and Eon was left with severe burns on his face and hands.

Fly Me to the Moon![edit | edit source]

With newly gained confidence (even if barely) he joined other children to their trip towards [ The Moon]. There he spent time with some new and old faces, though his most relevant interaction was made with a boy who introduced himself as [ http://magerp.wikia.com/wiki/Steiler_Silphic Watson]. At the end of the event he participate in a massive dance with all the other children at the ballroom.

The arrival to Fyr'st after their 'vacation' at The Moon proved to be bitter as they were greeted by an experiment gone wrong that claimed an alarming amount of lives in town. Some time after an eerie music filled the air, announcing the arrival of a terrifying circus with a less than friendly cast at their disposal. During this time the town was struck by Jester of Swords and other circus themed creatures, though the former were particularly dangerous due to their ability to inflict a curse on whoever came in contact with their blood, with Eon being one of the multiple victims after the Hospital was attacked and burned down.

Main article: The Shadow of the Clocktower

Fly Me to the Moon and Back![edit | edit source]

A second trip towards Disphere is organized although he goes with slightly different objectives in mind after forming a friendship with the Moon Princess. His plans do not carry out as expected however since the princess was inflicted with a mysterious 'illness' and thus could not show up in public. The trip proves to be more stressful as well when a few Mages are sentenced to death for breaking the rule in Disphere of not speaking of the sun. The group is spared in the end however.

One night when he meant to send a letter for the Moon Princess he meets up with Icar Celes at the fountain. As the boy expressed his desire for a friend from the sun, the two are surrounded by flames before a pair of [ dragons] show up for a fight. The situation goes out of control and the monster could only be subdued after several Mages joined in. Both Icar and Eon were left in terrible condition, covered in second and third degree burns.

Main article: The Shadow of the Clocktower

A Royal Ball event is organized in Fyr'st, where boys and girls are dressed up in a regal fashion to participate on several activities that ranged from uests to dungeons and dance related activities. There his friendship with a fox eared boy was reinforced and he shared a dance with the Moon Princess who gave him a ring.

Monstrous spiders took over the town, inflicting children with a condition similar to the Jester of swords's poison. Several Mages were affected with this including Eon who wasted away with every single day that passed while the spider's infection flowed through his system. Several friendships came to shine during this extreme time of need as he thought he would perish for good this time.

Despite he was still infected for the majority of the activity, Eon enjoyed himself as much as possible by trading with other children and joining many of the games available. Before the event was over, Aelia, Jamie and Nikolai managed to cure Eon from his condition.

After owing a favor to Missy, he ventured into the forest along with Nikolai and Yoken to fulfill his favor of bringing chaos to Fyr'stcercle. The trip ended up as badly as expected to the point Eon nearly murdered one of his companions.

A small party was hosted by Aelia at M village, which Eon attended and thanks to that had a chance to interact with many of his friends. He also brought Jack along so she could have a change to socialize further and enjoy herself. At the end of the party however, he caught glimpse of a child that looked somewhat familiar.

Another trip was organized, but this time instead of taking a completely different persona the children were aged up and split into small teams. The place compased by six islands proved to be more of a child's play in comparison to what Fyr'stcercle usually is and so Eon was left with mixed feelings about their stay on that land. His personality shifted considerably thanks to the gap with his younger self and he found out that maybe the path he has been following might not be for the best.

Eon displays positives symptoms of suffering schizophrenia, which usually take the shape of a drenched child displaying multiple wounds that vary from severe facial mutilations to bandages and bloody gashes. Regardless of how bloody or healthy the child looks what never changes is the fact there is a presence of white messy hair and a permanent smile that usually twists into a glasgow smile. Sometimes the child will remain quiet and simply wander around any area Eon is present at, but when there are constant loud noises or sudden yelling then the kid is prone to screech, provoking violent and panicky responses from Eon. These hallucinations are kept under control for the most part in the sense that Eon tries to live with or ignore their presence, despite they do increase his paranoia. 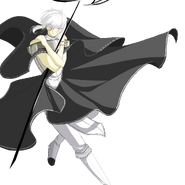 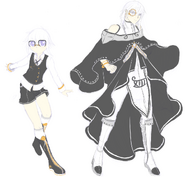 First Draft of Concept Art
Add a photo to this gallery

Retrieved from "https://magerp.fandom.com/wiki/Eon_Horloge?oldid=6876"
Community content is available under CC-BY-SA unless otherwise noted.