How about a comb for the thought? Or a bowling pin, a roller? If vocabulary tangles- would garden shears work to do away with the excess of your tongue?

— Friendly Hatter... having no idea what he is saying like usual

The Friendly Hatter is Owen O'Byrne's Tricore storybook character. Somewhat eccentric in his manner of speech and frivolous bearing, he enjoys tea parties and considers making friends the most meaningful goal in his whimsical life.

A young, well-dressed gentleman who is hardly a gentleman at all, being tidy and simultaneously messy in appearance with his iconic top hat nestled snugly in his wild mop of ginger. As woefully styled his tousled hair could be, obscuring a good deal of his face, his matching of clothing makes for a more suitable image; the Hatter is hardly seen without the full ensemble of jacket, waistcoat and breeches, gloves, neckcloth and spat-covered riding boots. He carries broken watches of all sorts around with him, as well as his cane.

At nearly every other time, he may have a teacup in hand (or sleeve, rather), magicked from wherever he pulls his little tea time tricks from.

He also has a sleepy pet dormouse that dozes in his hat.

As his title presents, the Friendly Hatter is a politely amiable- if somewhat mildly deranged and nonsensical- boy whose utmost desire is to befriend others and host tea parties with everyone, at every time of day for every occasion. Or, if there are no guests, or no occasion, to have tea time nonetheless.

Along with his skill for brewing tea and materializing tea sets, the hatter has a rather comical obsession with collecting hats and clocks of all sorts, often decorating (re: hoarding) his residences with them.

He is also rather fond of time, intangible or personified or otherwise, but has a penchant to run late to everything, as much as he insists on his punctuality.

Lady of March, Confectionery Witch, Mischievous Boy of Wonder, Machina Wizard, Voyager of the Seas, The Shadow of the Clocktower, Duke of Black Tarts, Black-Winged Riddler, Boy of Letters 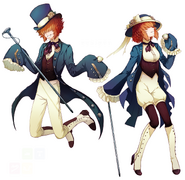 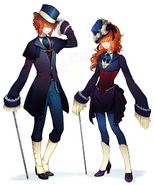 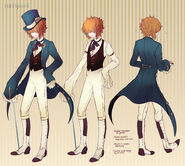 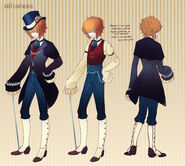 nifl'corheim outfit breakdown
Add a photo to this gallery

Retrieved from "https://magerp.fandom.com/wiki/Friendly_Hatter?oldid=5925"
Community content is available under CC-BY-SA unless otherwise noted.