Hisakawa, or Hisa, is a newly arrived mage in Fyr'stcercle. She doesn't remember much about herself, not even her given name.  She lives in M-6 with Vera, next to the M-5 kids. She has a deep grunge against them for breaking her window.

Usually only showing her right eye (both eyes are grey), Hisa styles herself in a more comfortable, rocker inspired fashion, spiking her black hair at the bottom. Both ears are seened pierced with grey studs. Hisa's mage item—the Galaxy Gem—is worn underneath her sleeve on the left wrist.

In the current arc, Hisa fashions a Tiger Biker Jacket and cat ear headbands, depending on her mood. Typically, she is seen wearing the black cat ears; however, special holidays may allow Hisa to wear a green kind. The hair length is interchangeable at times, as Hisa often trims the ends. The hairstyle of being a cyclops seems to be a personsal choice as nothing is wrong with her left eye.

Hisa transforms into a reverse mage, changing into a boy at about 5'6". The outfit is similar to an astronaut suit but more fitted and without the padding. Hisa's hair becomes more sleek and gelled back, showning off more of his face. The greaves reflect off the colour of the sky and has white speckles as stars.

Standing at 5'7", Hisa has her hair trimmed short and dyed a light blue due to the magic of transforming in Tessront. She wears the normal Inverno uniform, taking in account of the boys' uniform for the pants. Despite traveling in Movrinemos for a while, she prefers keeping the coat on but reveals later on to Lee that she is about a B-cup when they visited the oasis. Afterwards, she wears the Kitty Suit from the Levtro Trader Shop around until near the end of the event.

Not afraid to curse here and there, Hisa can be rather rude and straightforward. Despite this, Hisa respects and considers the abilities of people to do their best and tries to go out of her way to help them. Has a major case of chuunibyou, often trying to be a hero. Though, most of it is actually from boredom. In retrospect, she likes to be active and play outdoor sports as a competitive sportsman.

Hisa gets along the best with princess and quiet types. She dislikes wearing girly clothing or feminine stuff, except for cuddly animals. Admittedly likes cats the most.

Hisa zones out at work until someone orders food, since it is just playing the waiting game.

In Tessront, she is less childish, almost dropping the heroic acts. However, the confused face in dire situations—such as Eon, Evelyn, and Noè fighting a person who wanted the Heart of the Ocean—and in rather oddly-placed actions—such as Lee and Aelia taking photos of monsters in battle—still remains.

Hisakawa encounters Nathaniel at the fountain, believing he is the one who stole her belongings when she was knocked out in the fountain. After a short interrogation, Hisa lets him off the hook and goes to find the police to report the crime. She sees him some time later in South, asking him about money and food which he eagerly responds—

WIth a miracle, she is hired by Mari to work at Rhap City after getting impaled by cacti and transformed into a mage with ease.

She then meets Ki who is looking for the South Tent and escorts her to the location, filling out the second set of questions given by the workers.

In some off chance, Hisakawa accidentally meet two different versions of Sheila and is then explained later about it by Aelia.

Upon entering Tessront as an adult, Hisa ordered her crewmate Nathaniel Yates to help steer their ship, Frostbite, around the islands in hopes of finding the rest of their crew. This resulted in the two working part-time at Waffort for extra cash. Although Nate tried his best to cook the waffles while Hisa served, Hisa proved herself to be the better chef for actually remembering the order.

While exploring the islands with Lee , they encountered the Doctor IV and Postman V arriving in Levtro, followed by the Eastern Wind crew members Eon and Evelyn. The two seemingly close Numbers then offered some important information with them at the House of Fu. Unsure, Hisakawa and Lee followed them until properly seated in secluded room. IV and V reveal an important discovery about the mages and ordinaries who had lost their memories and those who did not. They suggested to visit a place where they may have potions to combat this in Rozfotia. Lee was visibly distraught about this, as the history of himself he had known was a lie.

Towards the end of the trip, Hisa received the needed ingredients to trade in for a Kitty Suit and assisted Lee in hunting for some items and photos. Although, she never bothered to getting a memory potion, Hisakawa managed to keep her Tessront memories.

A melee fighter that specializes in kicking, Hisa can only work in the vanguard and is weak against those who uses close-range weapons. 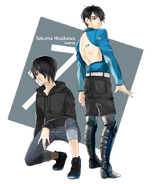 Old Design for Crossover
Add a photo to this gallery

Retrieved from "https://magerp.fandom.com/wiki/Hisakawa?oldid=6953"
Community content is available under CC-BY-SA unless otherwise noted.