Stay away from those kind of people. They'll corrupt you.

Kaguya (かぐや Kaguya) is the familiar of Jōsuke Kisaragi. She is voiced by Megumi Nakajima in her normal form and human form.

Kaguya wears a red votive bib like fox guardians at Inari shrines. She looks like a regular fox but instead of walking, Kaguya uses her floating ability to move around.

Kaguya's human appearance has not shown up in the main storyline of MAGE.

Although familiars are considered genderless, Kaguya takes on a more feminine approach even though her master is the supposedly opposite gender. She enjoys the more traditional girly things and likes the idea of being an older sister / mother. She can't stand dressing up, often running away from her Master if he has clothes for her to try. Kaguya cares about her Master a lot, almost overly attached. She tends to be overprotective and attacks anyone who would bring harm to her and her Master. Her most common attack is biting. If she's not around her master, Kaguya likes to collect random objects, especially flowers and shiny objects.

When it comes to other people, she prefers not to be involved in their problems or helping them. Because of that her master is so weak, she believes they wouldn't be able to contribute much help at all. But this could be laziness on her part. She is often found taking a nap or yawning.

Nothing is known about Kaguya's past prior to Fyr'stcercle.

Since the disapperance of friend Cadeau, Kaguya has been upset with a lost of a new friend, shunning out Decibel and Gummy in fear of losing another. Kaguya, invited by Gummy to attend the Royal Ball, drinks a potion that allowed her to become human during the entire event but without speech. It doesn't deter her from speaking telepathically with her master or to other familiars, however. She mostly used hand gestures and a photo of her and Jousuke to establish the connection. The photo is her most fonded and precious possession.

During the first day of Thanks-a-lot, Kaguya transform into a human form again with the ability to speak and assists Jousuke in his work with the post office and specialday. Although she shows much disdain towards the humans for allowing her master to get injured.

Kaguya doesn't resist Jousuke's decision to end his life, wanting to be loyal to the very end. Her belief that the contract of their master-servant relationship is based on her staying with Jousuke until he dies. In Jousuke's last moments, she conveys his final message to Aelia—he could not speak due to his extremely weaken state—before fading away with her master, dropping the Pearly Notebook the boy took from the Royal Ball as a reminder of their time in Fyr'st.

Kaguya can cause anything to float in midair, whether the target is an object or person. Kaguya sometimes uses this power when Jōsuke is transformed so he can move about. For attacking, she headbutts or bites.

Kaguya's Master. She likes him very much and very loyal to him. Rather than a partner, she serves as a mentor and makes sure Jōsuke doesn't do anything too rash. She tries to cushion bad news because he is still young.

A fellow sister familiar who belongs to Lait. Cadeau and Kaguya discussed on the origins of their kind after Cadeau's visitation to Three. Kaguya tries to console her sister familiar and suggests that she will tell her Master to research more about familiars for the both of them to Cadeau's delight. Although, the fox familiar does not know if this will accomplish anything.

Kaguya at the Royal Ball 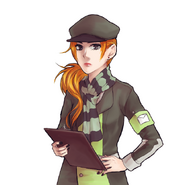 Kaguya disguised as a Postal Office worker
Add a photo to this gallery
Retrieved from "https://magerp.fandom.com/wiki/Kaguya?oldid=6500"
Community content is available under CC-BY-SA unless otherwise noted.