Kohl Emmerson is a mage currently residing in Fyr'stcercle. He is voiced by Kouki Uchiyama when male and Madoka Yonezawa when in mage form.

I am terrible at this by the way

Kohl generally appears in a loose, bright orange jumpsuit with a leather toolbelt attached. The pant leg of his left leg is usually rolled up and the leg itself bandaged from the calf down. His right eye is usually covered by a medical eyepatch and white hair tied into a ponytail. He has complete heterochromia, as his left eye is pink and right eye blue.

In Mage Form he becomes female and wears a tank top with half-shorts half loose pants, upper arms bound with long black straps with marble-like orbs attached. His hair is shortened into a neat bob.

Friendly and amiable in attitude, Kohl is very optimistic and open towards the people he meets. Although he is social he appreciates time he gets alone to build and fix things, a pasttime he seems to have had from long ago.

He gives off the air of being a reliable older brother and enjoys being relied or leaned on, Despite also acting tough he shows sporadic times of mental fragility and may be quick to shed tears. Usually a cheerful and sunny person, every now and then he shows signs of paranoia.

Powered by the gem suspended at the tail end, his spanner exudes a bright glow and lightens in weight to allow for up to six blunt successive blows. If half the blows land, there is a 20% chance of stun; if all land it rises to 30%.

Charging the jewelled end of the spanner, it can be released into a laser beam that fires like a gun. Although it has a high critical hit ratio, it drains him of energy much more quickly than his physical attacks and will leave him fatigued before long. 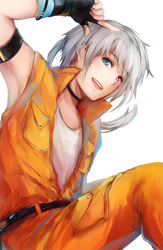 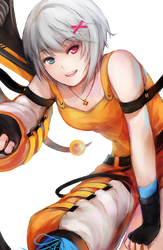 mage form
Add a photo to this gallery
Retrieved from "https://magerp.fandom.com/wiki/Kohl_Emmerson?oldid=6260"
Community content is available under CC-BY-SA unless otherwise noted.