Meruru Harvenshire, simply known as Meruru by most, arrived in Fyr'stcercle on October 11, 2012. Like many other Mages before her, she woke up floating in the fountain in Town Square with no memories of her past. Though she had a vague collection of her name, everything else about herself was unknown. Xiang Durant, being the first Mage she encountered, forcefully triggered her Mage transformation in an attempt to warn her the dangers ouf Fyr'st.

Meruru general appears with her hair tied up into two buns on the sides of her head and some sort of loose, long-sleeved shirt. While the girl is fond of bright colors, her wardrobe consists of primarily neutral or darkly colored clothing. She dresses rather boyishly for the most part, finding herself 'unsuited' for feminine clothing given her thin and boyish figure. For the most part, she uses long sleeves to conceal the fact that there is considerable scarring on her arms and upper back. This habit first started, however, when she noticed the unfinished tattoos on both of her arms. Unsure of how she felt about these mysterious designs herself, she prefers to keep them out of sight to avoid unwanted questions.

If her hair is untied, one would be able to see that it is quite long. However, that is rare as Meruru almost never leaves her hair down, finding the constant movement of the hair annoying. Though concealed by the fringes of her bangs most of the time, she also has two piercings in her right ear cartilage and one in each of her ear lobs.

In her Mage form, Meruru takes on features of an Asian dragon. A number of changes occur in the process of her transformation, including the development of slit-pupil eyes, the darkening of her hair, the growth of horns and a scaled tail, as well as the sharpening of her nails into claws. Her outfit, primarily red, is accented by bits of lime green. See picture for more details.

She has used a Mage Paintbrush so her mage appearance does look a bit different now. Also she has an alternate outfit from Fabulous potion which has yet to be revealed.

After her fight with a Baby Pyredoradora, Meru received significant burn scars along her arms as well as part of her back.

Consumed April 2012, before Ball of Loons. Does not seem to have an obvious outward effect?

For the Ball of Loons, Meruru wore an outfit consisting of a black silk blouse accented by a blue ribbon, a blue layered skirt, a black velvet vest, lace stockings, and black suede boots. Her accessories included long black velvet gloves, silver bangles, a silver ring, as well as a mother-of-pearl brooch and pearl earrings. Her mask was in the shape of a blue rose covering her left eye, opposite of the eye patch on Kohl Emmerson who was her date to the dance. She also wore matching blue and white flowers in her hair to compliment the mask.

This was also one of the few occasions on which she wore her hair in pigtails, instead of buns.

For the Royal Ball, Meruru took a potion which made her appear as a prince. She took the mage Mei as her date, and had many dashing adventures while appearing as a man.

Some short termed changes include, but are not limited to: transformation into an ostrich (Beasty Beet), adult Meruru (Age-screw Day), and rainbow hair (random event).

Loud, brash, and almost utterly tactless, Meruru is a blunt and straight forward girl. She rarely takes time to think before she acts, a habit that has gotten her impatient self in trouble in the past. For the most part, she takes actions based on intuition, and is driven for a large part by her curiosity in the unknown. Oddly enough, however, she seems to be easily delighted and satisfied by almost any answer to her questions - even if they do seem outrageous or absolutely implausible (a.k.a. she has an incredibly low IQ). Perhaps as a result of her lack of need to question what she sees or learns, she is a rather accepting individual most of the time and sees a friend in just about everyone that crosses her path - even those who have wronged her. Not much for shyness, she acts pretty much the same around just about everyone - upbeat, energetic, and constantly plowing ahead. Determined to keep what griefs she has to herself, she doesn't often appear to be glum or upset (except about petty things) around others in public except at funerals, where she finds it impossible to feign high spirits.

Sometimes, in order to allow things to continue as they are, Meruru comes up with her own ways of explaining why or how something happened. Of course, she keeps these rationalization to herself as she secretly believes sharing them with others makes them untrue. For example, she believes that funerals are supposed to be goodbye parties for someone who had recovered all of their memories and had already returned to their old lives. Death is still rather foreign concept to her, as she cannot simply wrap her head around the idea of simply not existing.

After having spent some time on Fyrst, however, her views have turned less optimistic than before. She is less trusting in many ways, especially after having discovered that Tarot Dun was the one who had killed her first friend on Fyrst, Peri. The idea of deception has shattered her perception of others and she has been at a loss as to what to do. Though she remains still somewhat oblivious and typically friendly to strangers, she is not as audacious as she had been in the fast to proclaim her friendship with others.

Meruru had arrived over a year ago, and has settled in at her house in E village. While she still knows nothing of her past except for the name she was given, she does not appear to be excessively bothered by her missing memories. In her conversations with others, she has expressed the idea that perhaps it is best what happened in the past is forgotten, though this is mostly due to her fear that she had been a bad person before Fyrst, if such a time ever existed.

Spoiler and trigger warning. You have been warned.

Spoiler warning. You have been warned.

It is myst! But here's a little bit of info to whet your appetites: Meruru grew up in an extremely impoverished neighborhood (which explains her stunted development) in a world dominated by violence. She had been once a very ambitious and cunning individual, as she had to be in order to ensure the survival of herself and those close to her. However, all of that was erased with the complete obliteration of her memories. Her unfinished tattoos in present Fyr'st links back to her 'past', and are significant to her in a way she does not understand yet.

The rarely seen Soup-kun, who seems to be tied to Meru in some way.

Meruru in her Mage form (left) and normal form (right).

Team 50 Shades of Pink uniform for the Olympics. 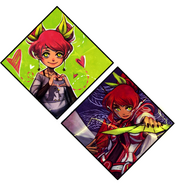 Add a photo to this gallery

Retrieved from "https://magerp.fandom.com/wiki/Meruru_Harvenshire?oldid=6519"
Community content is available under CC-BY-SA unless otherwise noted.