PamPam likes to play around with everyone!

Pam is a Mage that arrived in Fyr'stcercle shortly after the Royal Ball. She runs her own shop, Geleé Bag, by herself, making purses and bags of all sorts.

A tall girl with volumous blonde hair and cerulean eyes, Pam wears a red hair ribbon, floral pink camisole, cyan denim shorts, brown thigh-high socks, and red bow heels as her normal casual attire—sometimes mixing bright colors when wearing other outfits. Although not heavily mentioned, she does have her ears pierced. She mostly smiles or pierce up her lips to show her excitement or confusion, respectively.

More notable changes are her eye color changing to pink and scales sprinkling on her revealing and bare skin. Pam likes to transform for no good reason, showing off her good figure or insisting on someone staying. While not shown, Pam does have gills on the side of her neck, allowing her to breath underwater.

A carefree girl that tends to do whatever she wants. She likes to play around, especially with people, and gain new friends to use in the future. Pam doesn't seem to have a firm concept on moral reasoning, suggesting to Cade to mug someone or threatening Haku to tell the Nurse Felicity on him. But she does seem to care about animal-like children—for example, Adrian and Eon—as they're often more playful and less resistant about her affections. She claims to have three younger brothers in Fyr'st.

Pam speaks her mind, not one to keep secrets.

Often speaks with a French accent, mixing in French vocabulary. She also gives people nicknames, depending on her like for them.

There is nothing known or suggested about Pam's history.

Spoiler warning. You have been warned.

More information will be filled slowly as memories trigger.

Having fallen into the Town Square fountain, Pam gets escorted to the South Inn by Thorell, convinced that they were going to have sex until the boy locked himself inside the bathroom. Soon after while exploring around town, she is invited to stay at G-5 by the residents—Tarot and Evelyn—and agrees to cook them dinner in exchange for a better place to sleep at. However, her stay is cut short due to external forces and receiving a letter of residency at M-Village.

After establishing a place to live, Pam opens up her own shop, not wanting to be tied down by a boss.

While having a questionable one-sided relationship with Thorell, he and Pam seemed to get along better when they have a common enemy to focus on. Although Thorell claims to be in a relationship with Rehan, Pam doesn't fully believe it and tries to invade into his life anyways.

Pam has an estranged connection with Evelyn, but allows the younger girl to stay at her house for the time being until Tarot is cured. And in the meanwhile, she is taking care of Tarot's pet, Hei.

Pam works best in the rearguard, using debuffing skills against the opponents.

Pam cannot fight on her own, forcing her to team up with other people as she distracts the opposing team with her singing.

Skill: Love is in the Air[edit | edit source]

A song when heard that has a 30% chance of having the listener infatuated, skipping a turn. Otherwise it decresases accuracy by 10%.

A song that summons walls of water to protect the party from incoming projectiles.

"Pam" is the shorten form of "pamplemousse" which means "grapefruit" in French. 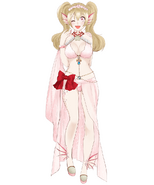 Pam as Forbidden Mage
Add a photo to this gallery
Retrieved from "https://magerp.fandom.com/wiki/Pam?oldid=6495"
Community content is available under CC-BY-SA unless otherwise noted.