A boy who fell from the sky. Very peculiar in nature, and hard to read despite his overflowing (and at times problematic) honesty. He has a tendency of overstepping boundaries and making people uncomfortable.

Average height, with a slim build. He has dark brown hair that flips out somewhat and dead-looking dark brown eyes. Just beneath his left eyebrow sits a prominent dark freckle. At first he would always wear his bangs pinned up to expose his face but now more often than not he leaves them down. He dresses in whatever he feels like, taking some interest in fashion but experimentally so in a wide range of fashions. Some days he will dress more normally, other days he might randomly be sporting some wild trend. He always wears the same pair of white wing-shaped stud earrings. Sometimes he wears glasses as well though his vision is good, explaining if asked that he believes people who wear glasses seem more likely to get punched in the face.

Similar to his ordinary appearance in height, build, and hairstyle however his hair and eyes become a silvery white instead. The largest difference between his normal and mage forms is the addition of two arms beneath his original set, as well as two large white angel-like wings which grant him full flying functionality. He wears a sleeveless hooded white tunic and a long white sarung-like fabric fastened at the hip. Around his neck is a collar of three gold rings.

Again similar to his ordinary appearance in height, build, and hairstyle although contrary to his mage form appearance the Riddler sports a pitch black look: black hair, eyes, and black raven-like wings. Beneath his wings in lieu of tailfeathers hang two dark, ethereal ribbons. His front torso is covered in feathers up to his neck, with an open back, some feathers even scattered along the sides of his face as well as his arms and legs around his joints. He wears dark brown-grey pants and knee-high black heeled boots. He also has pointed ears.

This time much smaller than his usual build, a puppet about five feet off the ground with pure white porcelain skin. His cheeks are painted dully with pale pink circles and his eyes are permanently rimmed with dark grey, his hair also a dingy lighter shade of grey. His body is hollow, fairly weightless, and rickety and collapsible with ball joints. From his head, elbows, wrists and legs hang wires connected to a large wooden gross which he either holds or drags on the ground behind him. He's clothed in his uniform of a blue and white double breasted coat and white gloves, with a black and white striped shirt and extremely torn up black leggings underneath. He wears only one boot on his right foot while his left remains exposed with a tattered red sock.

Honest to a fault -This is by far Sedric's most defining trait. He never has told a lie on purpose (the only lies he's ever told were things he's believed to be true); not only that but he has a habit of going out of his way to say more of the truth/his true thoughts than is necessary as he doesn't really know how to censor himself.

Oddball - Sedric's one of those 'special' kinds of kids who's growth can't be properly stimulated in a normal environment. He's neither stupid nor a total genius, not quite a savant, but he's definitely got a very unique mind. He tends to be really good at picking up new talents right away, but he loses interest in them almost immediately. Back when he was a highschool student before coming to Fyr'st he skipped class often, stifled by the classroom dynamic.

Poor attention span - It's really hard to keep Sedric interested, or rather he only takes serious interest in the most random or seemingly trivial things. He's the kind of guy who would read an entire encyclopedia on reptiles or something random and stupid like that for several hours if he's bored, but then accidentally burn the kitchen down because he forgot he was cooking something 5 minutes after placing it on the stove.

Masochistic - It's not that he specifically enjoys pain, it's more like he has a hard time really feeling anything. He's not soulless but he just can't seem to get his blood flowing or adrenaline pumping in any other way quite as effectively as a good ol' punch in the face. Aware of this he tends to go out of his way to subtly (or sometimes not so subtly) manipulate people into beating him up.

Prior to his life in Fyrst, Sedric was just an ordinary boy going to high school in New York though he has no recollection of any of it. He was very truant and did not fit in well with his abnormal behavior and personality. He often provoked bullies in order to get them to beat him up, finding it fun like a sport. That was how he met Steiler Silphic after one day picking a fight with the other boy's bullies. The two formed an unlikely friendship if it could be called that, Sedric mostly following Steiler around to observe him and Steiler putting up with it. It is unclear how things left off between the two before ending up in Fyrst.

Since appearing in Fyrst'cercle, Sedric has slowly progressed in his emotional development. In many ways he is still the same, exhibiting strange (and at times invasive) behavior such as lazy stalking, sleeping anywhere at any time, sneaking up on people, hiding in and hanging upside-down from trees, and provoking people for no reason at all for a fight.

His relationship with Eleonares has caused important progress in his development, the other boy unwittingly teaching him many things about himself as well as usually being able to calm many of Sedric's insecurities about himself being a feelingless monster, inhuman, or other self deprecating thoughts. His relationship with Kyler as well opening his eyes to a range of new emotions no matter how dull and numb they may still be in comparison to the average human experience.

Certain experiences such as a perceived loss of memory on Eleonares' part, as well as Kyler's death have caused his progress to dwindle and heart to harden, bordering the chaotic once again. Sedric recently has taken up more cryptic, secretive behavior. While he still tells no lies, still having no personal concept of dishonesty, he tells less and less of the truth, often speaking in a way that reveals very little at all compared to his previous blurt-it-out style of speaking. However when asked, he still always divulges the truth, but he's become less of an open book at least at the get-go. This is also the reason why he wears his hair down more often, partially hiding his face as a symbol of a slightly less honest Sedric. He also occasionally finds a small thrill in destructive behavior, nothing too severe as of yet but feeling a stirring in his chest that's difficult to ignore whenever he creates danger for himself or another, or causes feelings of uncertainty or fear in others.

Creates a temporary doppelganger of himself 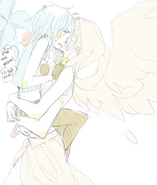 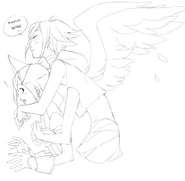 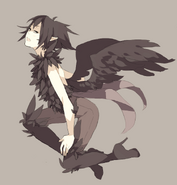 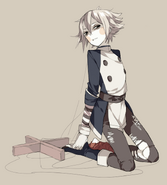 Sedric as a Kaonashi in Sento AU 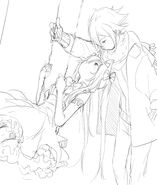 Sedric and Meril
Add a photo to this gallery
Retrieved from "https://magerp.fandom.com/wiki/Sedric_Fuchs?oldid=6717"
Community content is available under CC-BY-SA unless otherwise noted.