—Thai, responding to anything

Thalio "Thai" Lima is a forbidden-type mage from one of the more recent waves of incoming mages. Not much is known about him yet.

Initially, Thai only had an oversized gray t-shirt, and a pair of faded purple flannel pajama pants. He owned no shoes, and had to walk around Fyr'stcercle barefoot. It wasn't until around Day 4 that he began to dress better, wearing things like brand-name tee shirts and shorts. He also owns several pairs of shoes.

His short stature is his most noticeable physical feature. His eyes are bright green, and his hair is medium-length, black, and choppy. Despite his worn and destitute appearance, he's pretty upbeat.

Being a Forbidden type, Thai grows a pair of bright green deer antlers during his transformation. Thai's Mage form is based on Kodonafashion. He wears a green dress shirt with the sleeves pushed up to his elbows underneath a black vest, which extends into a train with green lining. He wears puffy black shorts, green-and-black diamond-patterned stockings, and spiked shoes. He also wears a pair of black fingerless gloves, a green jabot, and a spiked headband.

Thai is small, strong-willed, and moderately intelligent. He's inquisitive, curious, and eager to please. His feelings are easily hurt, but it's even easier to boost his confidence with a simple compliment. He cares deeply about people he considers friends and goes far out of his way to gain their approval. (People have told me that he's "cute and sweet," but that "he's not a typical kawaii defenseless shota, he has like, spunk.")

When faced with danger, Thai's stubbornness kicks in. He gets very angry and sarcastic before he gets scared, but he'll eventually dissolve into fear once he realizes that he's dealing with someone who could seriously hurt him.

Basically, he's generally cheerful and sweet, until he gets upset, which leads to anger, sarcasm, before finally getting legitimately scared and fearful.

Thalio first appeared in the bottom basin of the fountain in Town Square, where he'd been submerged and in a state of suspended animation for an undetermined amount of time. After regaining consciousness, Thai immediately broke the surface of the fountain's basin and painfully expelled the water that had collected in his lungs and airway. He's pulled out of the fountain by Eon Horloge, who tells Thai that he is now in Fyr'stcercle and likely has no memories of his past. He directs Thai to the Inn, where the boy can stay until the mysterious Chairman sorts him into a home in the Housing Villages.

Thai arrives at the Inn and meets Coffee, another new Mage. Coffee helps Thai dry off and feeds him some cake, while telling him that he's also new to Fyr'st and has no memories of his past. Thai finds a green star-shaped keychain in his pocket while talking to him. He realizes that he can't remember his name, and becomes gloomy. Coffee suggests he call himself "Kid" until he can remember his name. After Coffee falls asleep on the couch in the Inn's lobby, Thai / Kid decides to go back to Town Square to see if he can find his shoes in the fountain, if he had any to start with. He meets Keigh, a blind Mage, and gets frustrated when he fails to yield any helpful information. Thai / Kid returns to the Inn.

A day passes at the Inn, and Thai still has yet to receive a room, new clothes, or food. He's left with eating the leftover cake that Coffee had saved from whatever event was taking place at the Inn before Thai showed up. The next day, a strange curse hits Fyr'st as the weather grows cold and snowy, which transforms certain Mages into dogs. Having run out of cake, Thai leaves the Inn in the morning to scrounge around for food. In Town Square, he runs into Owen, who had taken on the form of a talking sheepdog. After a brief introduction between the two, Keigh runs into them, closely followed by Hertz. At this point, Keigh had been turned into a German shepherd. Thai voices his concerns about what newcomers to Fyr'st were supposed to do, and complains about his homelessness, poverty, lack of a change of clothes, and dwindling food. Owen tells him that the citizens of Fyr'st, such as shopkeepers and vendors, usually offer help to new Mages. He also tells Thai to confront the owner of the Inn about getting a room. Feeling a bit more confident (and having a reason to leave when hre realizes that the talking German shepherd is Keigh, whom he dislikes), he returns to the Inn.

Over the next couple of days, two Mages (Roxanne and Ethan ) pass away. Thai happens to be out getting groceries during both of these funerals, and witnesses mourners throwing farewell letters into the fountain at Town Square. Not understanding that it was a funeral or what the purpose of the farewell letters were, Thai tosses a grocery list into the fountain during Roxanne's funeral and a market receipt during Ethan's.

As Thai attempts to force himself to remember his past, the only memories that resurface are those of preparing food. He practices making different types of sandwiches, and leaves the failed sandwiches outside of Coffee's door in an attempt to be better friends with him, or something. He learns that some Mages can start up businesses to generate cash. Since sandwich-making is his only "valuable" skill, Thai prepares a few samples in a basket and distributes them to strangers in Town Square. However, the weather turns uncomfortably hot, and his sandwiches begin to fall apart. He gives a Philly cheese steak sample to Evelyn, but it falls apart all over her shirt. Feeling guilty, he quickly birngs her to the Inn's laundry room for her to wash up before her clothes stained, offering her some stranger's clothes from a clean stack. They talk a little bit about other possible jobs Thai could get, as well as how both of them still don't know much about Mages or Fyr'st in general. Thai hands her a new basket of higher-quality sandwiches for her trip home.

The next day, Thai scours the town for job openings, and stumbles upon the Gelateria run by Jousuke. He briefly meets Aelia and Sheila before asking Jousuke if the Gelateria was hiring. Jousuke quickly hires him and tells him to return the next morning for his first day at work.

The next morning, Thai finds that Jousuke is on break. Noticing that the town recently became decorated with dragon banners, he decides to go find out what the event is while Jousuke is gone. In Town Square, he discovers that dragons are descending upon Fyr'st soon, and that Mages can form crews of at least three people to hunt for them. Wanting to be a dragon hunter, Thai asks Owen if he wants to be part of his crew. Owen asserts that he wouldn't be a very helpful teammate, and tells Thai to only ask him to join his crew as a last resort. A little disappointed, Thai agrees to find Owen if he still needs people for the dragon hunt. Unknown to Thai, it was Hug Day, which Owen capitalized on before they parted for the day. It was rly moe.

Thai becomes more enamored in the idea of being a dragon hunter as actual dragons can be spotted flying above Fyr'st. On the way home from a shift at the Gelateria, he bumps into Theo, who was a fluffy pink sheep at that point. Noticing how interested Thai was in the dragons above Fyr'st, Theo decides that they should form a crew for the dragon hunting event. Thai, excited, agrees. He soon leaves Theo in Town Square to return to the Inn to see if he'd been sorted into a village home yet, and finds that he's been sorted into house E-2.

During a break from work, Thai catches up with Coffee in Town Square amongst the breakfast vendors. Coffee tells him that he's been busy with building his team's dragon ship, which disappoints Thai, who'd hoped he could've asked Coffee to join his team. Coffee asks if Thai can transform yet (and demonstrates transforming, morphing into his Mage form), or if he can remember his name. Thai is still being referred to as "Kid." Thai vents his disappointment to Coffee about how his failure to transform, his inability to remember his name, and his overall inadequacy. Coffee tries to offer advice, telling him that everyone has to work hard to get what they want, and that Thai should be patient for things to get better for him. 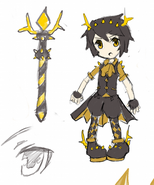 Thai's oldest Mage design, circa February 2013. Originally gold and diamond themed. As well as antlers on his head, Thai was also going to have antlers on his heels, and his feet would be hooves.

Finalized design.
Add a photo to this gallery

Retrieved from "https://magerp.fandom.com/wiki/Thalio_Lima?oldid=6171"
Community content is available under CC-BY-SA unless otherwise noted.