Thorell is a tall boy with a noticeably athletic build, and vibrant blue eyes that contrast with his dark skin and hair colors. His bangs, which are overgrown past his eyes, are usually parted down the middle. He wears eight white-platinum rings on his fingers, usually four to each hand. He also wears a Friendship Bracelet (shared with Rehan Avakian) for traveling convenience.

As a Mage, Thorell gains eight spider-like legs that protrude from his spine. Each leg is composed of a metallic exoskeleton and has a maximum reach of 15 feet. He also gains three extra sets of eyes, making eight in total, all of which are milky-white in color.

His Mage form was originally magenta in color, but was changed to gray using a MAGEical Paintbrush from the casino. He later received a second outfit though a Fabulous Potion.

Although everything the boy says is outwardly kind and even flattering, there's always something about his mannerisms that seems offsetting. His frequent tendency to lie is painfully transparent, perhaps intentionally so, though his motives are never clear. He seems to care very little about the opinion of others, and almost seems to fish for insults. Since he never bothers to explain himself, even in situations where he's a victim or justified in behaving the way he does, it only worsens people's impressions of him. Whether he means to manipulate others, or simply has a brain that doesn't work quite right, is anyone's guess.

Adrian Sommer was the one that invited Thorell to Fry'st, but is unaware of that fact, as he had written a different name on the Invite Letter. It is implied that whatever name Adrian wrote is Thorell's true name, while the one he uses to introduce himself to others is fake.

He later invites Nathaniel Yates though similar means, though he soon realized that the boy was not the person he had expected him to be. Because of that, has shown little interest in exploring Nathaniel's significance to him prior to Fyr'st.

The reach of Thorell's limbs makes him best suited for mid-ranged combat. His skills rely on Speed manipulation, and have capabilities against opponents both slower and faster than himself. His skillset makes him a hybrid offense-support character, which gives him more options but less effectiveness in any one style. 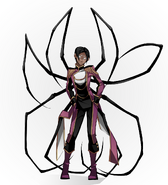 Royal Ball (Cinderbella Potion)
Add a photo to this gallery
Retrieved from "https://magerp.fandom.com/wiki/Thorell_Maharaj?oldid=6815"
Community content is available under CC-BY-SA unless otherwise noted.